What Are Those Weird Symbols In Buddhism?…
Select a topic
Join the Community or Sign in

What Are Those Weird Symbols In Buddhism?

Have you ever seen Buddhist iconography and wondered what it was? Well, join the crowd. I used to wonder what was going on with those too…after all, they looked pretty abstract and strange. Over the course of centuries, Buddhism has developed a complex yet understandable scheme of symbolism which was used thoroughly in Buddhist art.

But the most popular (and likely those you’ve seen already) are known as the 8 auspicious symbols. Each of these symbols are closely related to the teachings of Buddhism, and are important to it’s history and meaning.

SEE ALSO: How To Heal Your Hair, Skin, And Lips With Coconut Oil 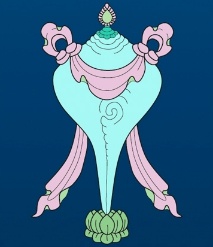 The white conch which coils to the right symbolizes the deep, far-reaching and melodious sound of the Dharma teachings which awakens disciples from the slumber of ignorance and encourages them to seek the highest welfare for themselves and others. 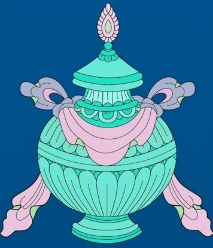 The treasure vase symbolizes a long life, wealth and prosperity. 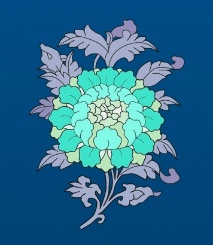 The lotus symbolizes purity of the body, speech, mind and the blossoming of wholesome deeds in blissful liberation. The fully-opened lotus represents the fully-awakend mind and the flower bud represents the potential everyone has to reach enlightenment. 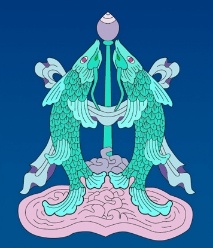 The symbology of the fish is particularly interesting. Any being can drown in an ocean of suffering; but fish swim freely, migrating from place to place spontaneously. This is the state we should all seek to attain, navigating through life without being overwhelmed by suffering. 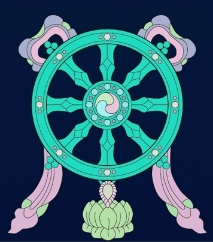 All of nature is interrelated, and the endless knot represents that. Not only is everything interrelated, the universe is entwined in such a way that nothing can enter it or change it; it’s immutable, just like the knot. It also signifies cause and effect and the union of compassion and wisdom. 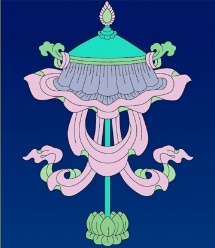 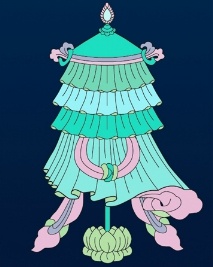 Buddhism teaches that most people have very little control over their themselves, in reality. The path of dharma was made to fix that. The victory banner represents the victory over one’s own and others body, speech, and mind. It also stands for the complete victory of the Buddhist Doctrine overall harmful and pernicious forces.

The Dharma Wheel, also called the dharma-chakra or dhamma chakka, is one of the most well-known symbols of Buddhism. The Wheel has eight spokes, representing the Eightfold Path. According to tradition, the Dharma Wheel was first turned when the Buddha delivered his first sermon after his enlightenment.