The Science Behind Mantras: Part II…
Select a topic
Join the Community or Sign in

The Science Behind Mantras: Part II

We all know that there is evidence that sound waves were crucial in creating the universe. Scientists all agree that there was a big bang, a massive sound! It jumpstarted the entire creation process and propelled all these elements into the depth of space. That big bang was probably the loudest that could ever be heard in the universe, until the end of time. The logic is that sound waves are a force that travels through particles.

In the Bible, Genesis 1:3 states, “And God said, “Let there be light,” and there was light. ” It simply shows the power of God speaking. According to John 1: 1-3, “In the beginning was the Word, and the Word was with God, and the Word was God. He was with God in the beginning. Through him all things were made; without him, nothing was made that has been made. ” He was the Word, a spoken form of sound.

Do sound and vibrations have the potential to influence matter, or even create it? This is a fascinating question, with profound implications for transforming our way of relating with the world — that the world is not made of separate entities, but in fact consists of a flow of interdependent, interwoven, rippling modularities.

Cymatics is the study of visible sound and vibration. Typically the surface of a diagram, plate or membrane is vibrated and regions of maximum and minimum displacements are made visible in a thin coating of particles, paste or liquid. All objects have a set of natural frequencies and each frequency is associated with standing wave patterns. The pattern formed by the salt on the plate is the standing wave pattern of one of the natural frequency of the chaldni plate on which the salt is spread and placed over a speaker.

As the music is played the salt starts vibrating and tumbling until it reaches a point along the plate which are not vibrating. Subsequently, the salt comes to rest along the nodal positions. Being unable to move they become nodal points, the point of no displacement.

The conclusion is the whole is of a periodic nature and it is this periodicity which generates and sustains everything. The three fields — the periodic as the fundamental field with the two poles of figure and dynamics — invariably appear as one.

It’s been said that mantras, which are traditionally sounded in the ancient language of Sanskrit, are designed to create sounds that literally vibrate in the body. According to Dr. David Frawley, author of “Wisdom of the Ancient Seers,” mantra is not like our ordinary, artificial and rigid language, but is an organic “language in which sound and meaning correspond”:

“[Words in mantric language] are not names in our ordinary sense at all. They are the essential sound-idea behind the object that evokes its being, which becomes the tool whereby its essence is grasped. They are the mantric names of objects which arise within the mind in meditative perception, as the mark of entry of the being of the object into the fabric of the mind. [..] They are the vibration of the mind uniting with the being of the object in the unity of seeing. [..] In the mantric sense, therefore, to name is to know the nature of the thing, to touch its essence.”

SEE ALSO: Mantras: The Science Behind Its Power – Part I

Mantra Delivers Us from Sense Dependency

The power of mantra is revealed in the roots of the Sanskrit word, man, meaning mind; and tra, meaning deliverance or projection. Thus, chanting the sacred sound of the mantra delivers us from our sense dependency, from our unrelenting habit of looking toward the senses for gratification; pleasures that are and that will always be, fleeting and limited. Chanting is a pleasure that transcends the senses, it takes us beyond the bounds of time and space Thus it soothes in a most profound way. It soothes on a cellular level. It merges our finite identity with the infinite, and so dissolves us. It relieves us from the sights and sounds and stimulation of the material world and delivers us into a spiritual space, where the sound is God (Sabd Brhma). Through the sweetness of devotional surrender, mantra turns the negative into positive. It is said, “as music has charms to soothe a savage beast, so the spiritual sound of mantra soothes the restless mind.”

It awakens the divine light and love within us. When our spiritual identity is awakened, we experience the unity of all life, which consequently awakens our hearts and opens our capacity for compassion. We may then live out our material lives free of animosity, envy and pride.

Mantra Balances the Nervous System and it Heals Us 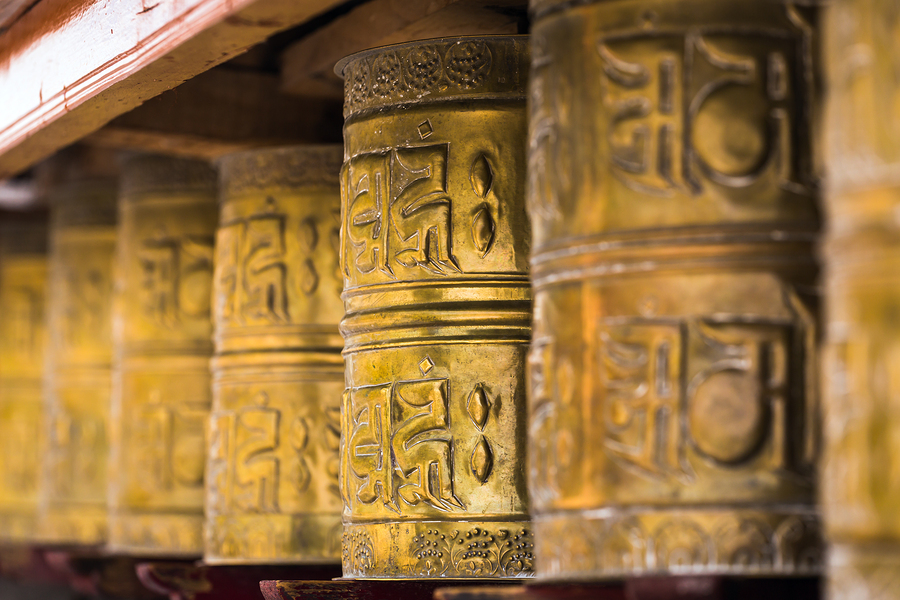 The breath helps adjust all the rhythms of our body. Because our nervous systems are often overtaxed, these rhythms are thrown out of balance. But through the technology of sound, we begin repairs. And when the breath is set to sound the positive effects on the parasympathetic nervous system – that part of the nervous system that tells us everything is alright – are multiplied and the healing response is triggered and it all translates into healing and stronger immunity.

Thus it opens up our intuitive power.

The entire universe was built on sound, which is nothing but vibration. By vibrating a certain combination of sounds, we are able to tune into various levels of intelligence, or consciousness. Thus, chanting mantras is a conscious method of controlling our moods, and in turn, our frequency and resultant all-around radiance. Mantras increase your auras due to the effect on the symphathetic and parasympathetic nervous systems.

It helps us unlock our potential, intuitive power, wisdom, our knowledge. The human DNA can produce longitudinal scalar waves, faster than light. A mantra is a carrier wave with potent information within it and mantras reprogram our DNA. It helps us manifest our inherent potential and enhance the quality of our life. We don’t need to depend on any body or seek outside help. It develops our self-dependency and thus empowers us. Last but not the least, the essence is this: the benefits of chanting cannot be established through reasoning and intellect. It can only be experienced through devotion, faith and constant repetition of the Mantra.