Mantras: The Science Behind Their Power – Part I…
Select a topic
Join the Community or Sign in

Mantras: The Science Behind Their Power – Part I

The word “mantra” comes from two Sanskrit words: “Manas”, meaning mind, and “trai”, meaning to free from. In the literal sense then, mantra means to free from the mind. As sacred sounds, mantras were bestowed to sages often in meditations after they took on intense spiritual practices. The sounds were subsequently tested to examine the consistency and intensity of their effects and then recorded in the Vedic scriptures to have an organized system of spiritual tools for transformation.

SEE ALSO: The World Is Music: The Key To The Mystery Of Creation

As the rishis sat in meditation and reached higher levels, they received the sounds known as ‘mantra’. Mantras, therefore, are not a creation of the human mind. They were perceived from higher sources. In Islam, it is said that the Koran was revealed by God, which means that whoever received the Koran had attained a very high yogic state. In the same way, Christians speak of the Bible as a revealed scripture. Sanatana Dharma, the eternal Vedic religion, too is understood as having been revealed. The Vedas were not written by man.; it only means that they were revealed to rishis in the transcendental state. The same is said about the Ramacharitamanas.

In India’s ancient learning methods, textual memorization is standard. Traditional scholars, or pandits, master many different types of Sanskrit poetry and prose texts; and the tradition holds that exactly memorizing and reciting the ancient words and phrases, known as mantras, enhances both memory and thinking.

Effects of mantras in cognitive functioning

Neuroscience shows how rigorous memorizing can help the brain. The term the ‘Sanskrit Effect’ was coined by neuroscientist James Hartzell, who studied 21 professionally qualified Sanskrit pandits. He discovered that memorizing Vedic mantras increases the size of brain regions associated with cognitive function, including short and long-term memory

Structural magnetic resonance imaging (MRI) at India’s National Brain Research Center was used to scan the brains of pandits and controls matched for age, gender, handedness, eye-dominance, and multilingualism. What was discovered from the structural MRI scanning was remarkable.

Numerous regions in the brains of the pandits were dramatically larger than those of controls, with over 10% more grey matter across both cerebral hemispheres, and substantial increases in cortical thickness. Although the exact cellular underpinnings of grey matter and cortical thickness measures are still under investigation, increases in these metrics consistently correlate with enhanced cognitive function.

According to late Vedic priest Thomas Ashley-Farrand, a renowned guru who played an instrumental role in bringing the wisdom and gifts of Sanskrit chants to the West, “Mantras have a very specific effect on our mental, emotional, physical and spiritual states. Indian sages teach that these sound meditations can actually have the power to transform our human conditions, including relationships, health, happiness, career, finances, and success, to name a few.”

Mantras have an effect in all levels of our consciousness 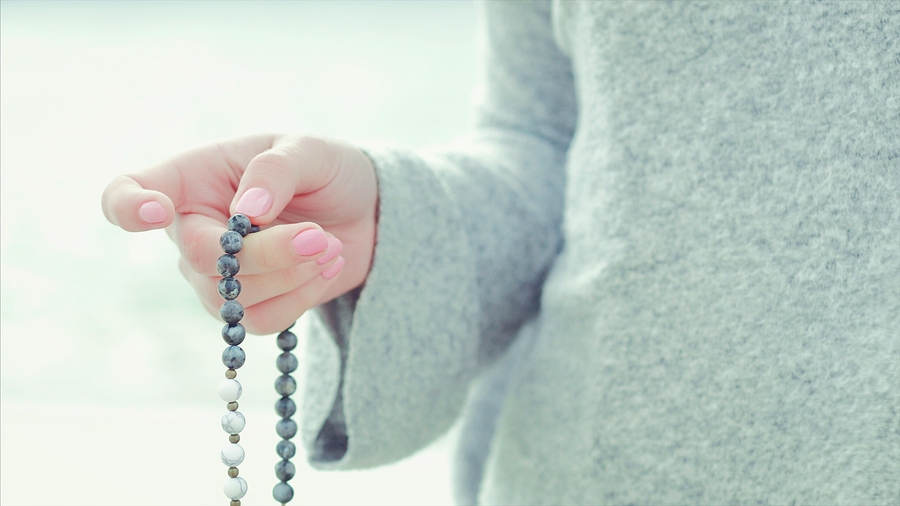 In addition to these measurable mental, emotional, and physical responses, our subtle energy body also reacts to the vibration of sound. As sacred sound vibrations, mantras work on all of these levels and therefore can bring about change at all levels. Each word or sound in a mantra has a very specific energetic effect. For example, chanting a mantra stimulates certain parts of the brain that release beneficial chemicals, which in turn elicit a more relaxed and peaceful state of consciousness.

On an energetic level, our etheric or spiritual body, which includes our chakras and Nadis (energy centers and channels) and aura also respond to the vibration of mantras. Seers state that they can actually observe the petals of the chakras (which look like lotus flowers) open and brighten up as someone chants a mantra. Each chakra has its own mantra which can be recited to increase its life force energy (known as prana or chi) and facilitate healing in its corresponding area.

When you combine the mantra practice with a specific intention you further clarify and amplify the results.

A 40-day practice of reciting a mantra 108 times each day (ideally morning and night) is recommended. In many religions and spiritual traditions, it takes 40 days to break an old mode of consciousness and experience a shift. And 108 corresponds to the number of nadis – channels through which spiritual energy flows and connects with the chakras. So, chanting a mantra 108 times for 40 days helps the essence of the sacred sound to become part of your consciousness on all levels. Developing a mantra practice is a wonderful way to connect with your spirit on a daily basis as it lets you take a much-needed break from your daily busyness and re-center. And if the practice works as the Vedic gurus’ say, you might just enjoy some transformative inner and outer benefits as sweet fruits of your daily labor.

Bija mantra and benefits of chanting

Of all the types of mantra, the first and the highest is Om. Om is the seed or bija mantra of all mantras. The rishis realized this cosmic Om in the very highest planes of consciousness, in the state of self-realization, atma sakshatkar. All the mantras in existence have come from Om.

It is composed of three sounds – A, U and M. Om is found in all societies and all religions, in one form or another. Om is the foremost of mantras. First comes Om and after it the mantras of Gayatri. The twenty-four syllables of Gayatri along with Om should be considered the original Gayatri mantra. The Vedic rishis who received this mantra were established at a very high level of consciousness.

Thereafter, there are mantras pertaining to the third body or the unconscious body, also known as bija mantras. We call them bija or potential mantras, because they contain dormant, the potential energy of different forces. Each power or force in the world has its own bija mantra, such as ‘Aim’ for Saraswati, ‘Shreem’ for Lakshmi, ‘Kleem’, ‘Kreem’, ‘Hreem’, and so on. All the short, seemingly meaningless mantras you might have heard are bija mantras.

The power of sound 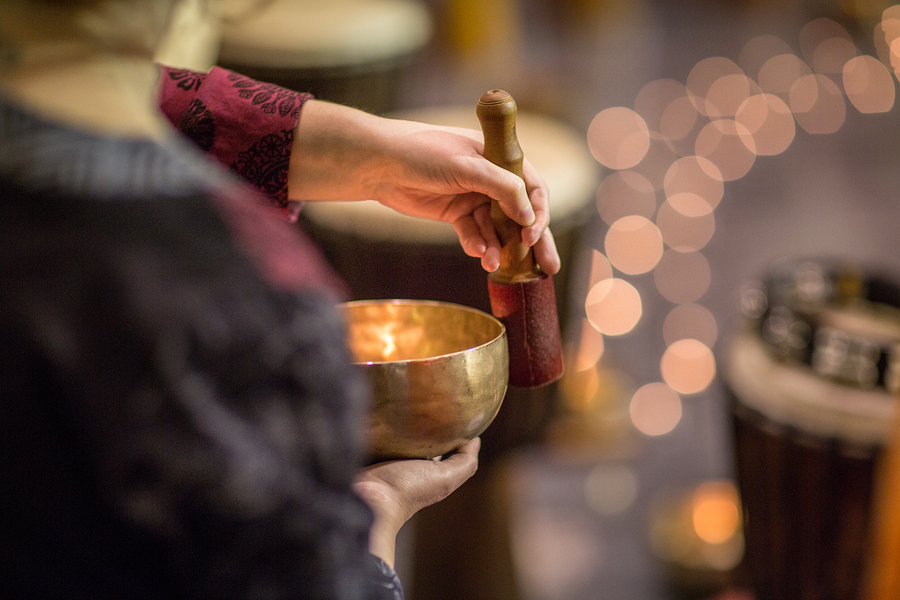 In a world of shrinking attention spans, where we are flooded with information daily, and children display a range of attention deficit disorders, ancient Indian wisdom has much to teach the West. Even introducing small amounts of chanting and recitation could have an amazing effect on all of our brains.

Joshua Leeds, the author of The Power of Sound and an expert in the field of psychoacoustics, the study of the effects of sound on the human nervous system, explains how sound works by:

…creating a frequency and vibration for someone that’s conducive for him or her to heal. Sound healing is trending up. It’s like where yoga was 15 years ago. People are realizing that sound is a viable medium to address distress, enhance learning, even work with an autistic child.

Jeffrey Thompson, founder of the Center for Neuroacoustic Research, says different frequencies target the various densities in the body. He uses a vibroacoustic sound therapy table.

As the frequencies slow down, from 500 to 400 hertz (a hertz is one cycle per second), you feel it more in your muscles, then your joints, then in your bones. We can give a vibrational massage, down all the way to your cells. I can do cranial work with sound, work on organs. You’re finding frequencies to elevate the body’s cells to a super-healing state, rebuilding more tissue.

According to Leeds, the future of sound will be frequency medicine:

There’s more on sound science than ever before. We know what is happening molecularly. What we think of as sound healing will be called frequency medicine.

There is some relationship between the brain and the contents of consciousness. If I take LSD, my thoughts and feelings change as the chemicals do their work. Throughout history great thinkers have agonized about what the connection between the mind and the brain may be. Luminaries such as Plato, Schiller, William James, C. D. Broad, and Henri Bergson have proposed that the brain, rather than producing the mind, interacts with it. Grosso describes this point of view with an analogy from electronics:A crude analogy with radio and radio waves: the radio does not produce the radio waves; it detects, transmits, and filters them.

One source many forms

In science, we find that when electricity is flowing from one central circuit, the amplifier, tape-recorder and all other appliances work. The same energy gives heat from the heater and coolness from the fan. The heat and the cold are varied manifestations of one energy. The truth is that shakti is not just of one kind. Intellect is one shakti, memory is another shakti, speech, prana, and knowledge are all shaktis without which we cannot exist. That is why there are different bija mantras for awakening these different powers.

There are two forces or powers in the mantra. One is the power of consciousness, Shiva or purusha. The other is the force of nature, matter or prakriti. Through sadhana, these two forces are awakened, and when awakened, they continue to help you throughout your life

Roles of faith and devotion in mantra chanting

Mantra requires that you invest your faith in a deity. Every mantra has a deity. Faith is the prerequisite for practicing mantras. The faith that the invocation of the deity by mantra will manifest in physical form or matter. To reach any level above where we are, we must first have to accept with humility that we require help from someone who’s already there; that we haven’t yet figured out everything; that we need the beneficence of someone more superior than us. Receiving that benediction is grace and to be a worthy recipient of grace requires bhakti.

A mantrin believes that in the vast universe, there is a divine entity that can assume a form and that form can bestow upon him siddhis or protection. The firm belief that the divine form is the savior and can help him or her navigate through the choppy ocean of life to reach the shore is the foundation of bhakti. To be totally in love with God (or your deity) and to exercise complete self-surrender towards your object of worship is bhakti.

Belief in some form of a divine energy and devotion towards that form is one of the basic requirements of mantra yoga. So equipped with faith and total devotion if we practice the chanting of mantra daily persistently, we surely can calm down the chatter of our mind and connect with the soundless, formless, eternal bliss and peace of the God Consciousness or our Inner Guru. Thus we can bring the science of mantra into our life.