Deep Listening: A Simple Way To Make A Difference…
Select a topic
Join the Community or Sign in

Carmelene Melanie Siani is a 75-year-old freelance writer who has been published at Elephant Journal, Better after 50, Huffington Post,...

Menopausal Symptoms or a Kundalini Awakening? Does It Matter?

Deep Listening: A Simple Way To Make A Difference

Sitting across the table from my friend, I could clearly see the disfiguring scars that traveled up and down the side of her face. It was about 25 years ago but I still haven’t forgotten that day. She was telling me the story of the horrific accident she’d been in when she was a little girl. Finally, she said, she’d refused to have yet another skin graft surgery.  It would have been the sixteenth. “Every time I had one of those operations, it was like being down at the bottom of a deep well. I’d look up and see my mother and my family on the edge of the well peering back down at me.”

“‘We’re here for you,’ they’d call out. ‘We love you.’ But they never left the rim of the well. Not one of them ever came down into the well with me.”

Despite the fact that her mother sat by her bed day and night, every time my friend’s face was cut into, she felt like she was going back down into that well entirely alone.

Her words made my heart ache.

Lessons From a Friend

She turned to look out the window and I wasn’t sure she was even going to tell me more when she looked back.

“I wish they had listened to me.” she said quietly. “I wished they had let me be, exactly as I was; afraid and in pain.  I wish they hadn’t told me the pain would go away, that I would feel better some day.  I wish they had just let me talk about what it was like for me and even though I was little, to not deny my experience.”

What my friend explained to me was that if they’d have done that, they would have been down in the well with her rather than merely watching her flail around on the bottom, trying not to drown. I’ve never forgotten the wisdom and power of my friend’s words. I wish they had listened to me. They made their mark on me and hearing them, I made a commitment to myself.

Take a Look at Our Thich Nhat Hanh Collection!

Why Listening is Important 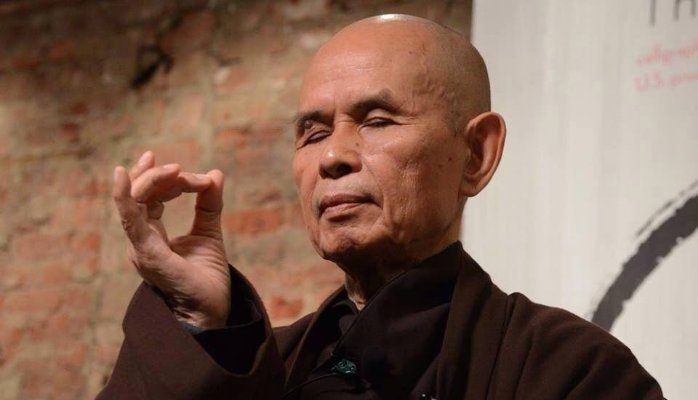 Whenever I happened to be around people who needed to tell a difficult, painful or emotional story—or whenever they were actually going through one—I would offer what my friend suggested and, instead of standing on the rim of the well calling down words of encouragement, I would “get into the well with them.”

I made a commitment to listen.

There is no question but that my life has been expanded and enriched by the happiest and saddest of stories that so many have told me since. My world has opened and I’ve realized over and over just how much we need each other. There was the Vietnam vet who was still haunted by the dark eyes of an unarmed villager he’d shot. The young mother who’d had and emergency Caesarean Section in order to save the baby that was born dead after all.  And the Holocaust survivor who claimed that it was pure luck that she had made it out alive when so many others had not.

Along the way, I came across a quote of Thich Nhat Hanh that helped me to know what to do when offering what he refers to as “deep listening.”

“Deep listening is the kind of listening that can help relieve the suffering of another person. You can call it compassionate listening. You listen with only one purpose: to help him or her to empty his heart. Even if he says things that are full of wrong perceptions, full of bitterness, you are still capable of continuing to listen with compassion. Because you know that listening like that, you give that person a chance to suffer less. If you want to help him to correct his perception, you wait for another time. For now, you don’t interrupt. You don’t argue. If you do, he loses his chance. You just listen with compassion and help him to suffer less. One hour like that can bring transformation and healing.”  ~ Thich Nhat Hanh

All these 25 years later, I am still grateful to my friend for trusting me with her story and for telling me what she had needed.

I read somewhere once that “all we really want to do is make a difference in each other’s lives” and, by showing me just how important deep, compassionate listening can be, my friend showed me a way to do that.

Carmelene Melanie Siani is a 75-year-old freelance writer who has been published at Elephant Journal, Better after 50, Huffington Post,…