The Meditations Of Gandhi

Most people know of Gandhi in a certain context; they think of him as the liberator of India, the powerful force behind a people that defeated one of the strongest nations on earth.

But while this was certainly true of Gandhi, there was a part of him that many people are not aware of:

Gandhi, like many great men and women before him, drew his strength from his spiritual life.

In his early life, Gandhi was not necessarily inclined towards spirituality; in fact, quite the opposite.

Gandhi, by his own admission, was unruly and absorbed in himself. He stole, lied, and disobeyed his parents in many instances…even severely mistreating his wife and missing the death of his father due to his selfish desires.

A better explanation of this can be found in his autobiography.

But through those negative experiences, Gandhi came to understand that he needed to drastically change.

Pursuing his degree in law, he moved to England. There he not only studied his chosen profession, but other religions as well, looking for something that clicked with him.

Ironically, it was the religious texts of his native India that spoke most to him. From there, it was only a matter of time until he began to really dive into a spiritual practice. 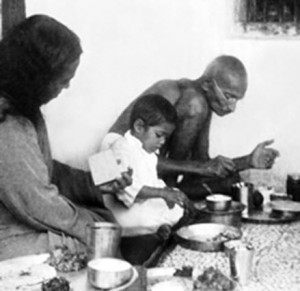 As time went by, Gandhi’s devotion and spiritual life deepened. Of course, this went hand in hand with his political causes, and in fact informed them.

He embraced vegetarianism, simplicity, celibacy, a day of silence, and most importantly, nonviolence, in an effort to cultivate a stronger spiritual lifestyle.

He even picked up a meditation practice from none other than Paramahansa Yogananda.

Yogananda was travelling in India at the time, and was very much interested in meeting Gandhi to pay tribute to his work towards liberating India.

Spending time on Gandhi’s ashram helped him decide that Gandhi would appreciate the meditation technique known as Kriya yoga; and in fact Gandhi had asked for it.

After receiving the technique, Gandhi practiced regularly and faithfully morning and night.

Kriya yoga became an intricate and important facet of Gandhi’s life, and helped him to remain calm as things intensified in India.

In finding his path, Gandhi had this to say about Hinduism:

“I believe the Bible, the Koran, and the Zend-Avesta to be as divinely inspired as the Vedas. I believe in the institution of Gurus, but in this age millions must go without a Guru, because it is a rare thing to find a combination of perfect purity and perfect learning. But one need not despair of ever knowing the truth of one’s religion, because the fundamentals of Hinduism as of every great religion are unchangeable, and easily understood.”