Having completed her 700-hour Yoga Therapy, in accordance with the International Association of Yoga Therapists, Deborah offers signature therapeutic workshops...

Ahimsa on the Road: Tips for Eating More than Peanuts

Bhakti Yoga And The Power Of Sound

Maha Love For Mothers And Their Daughters

Indra Devi, one of the first female yogis in the West, was raised primarily by her grandparents. As an adult, she and her mother shared homes in Moscow, Kiev, Riga, Berlin, Shanghai, and then California.

Herself childless, and a proponent of detachment, the love she had for her birth mother was indelible.

Indra was a fiercely independent woman who was far from the traditional housewife and homebody of her era. Yet the bond with her mother was deep, according to Michelle Goldberg in The Goddess Pose.

So strong was the connection that she left India abruptly on one visit and made it home right before her mother passed away unexpectedly.

I, too, wanted to be independent. I trekked around Latin America since I was 16. At 21, I returned to the nest briefly. In my overworked, overstressed career days, I avoided chatting with anyone — except my mom. One day, a work-based miscommunication sent me 1,200 miles north, to my hometown.

That weekend, while with my parents, my mother repeated ad infinitum a word I’d never before heard her utter. She kept saying my trip was “providential.” A few days later, she passed away unexpectedly.

For some, the mother/daughter ties begin nine months before birth. For most, once the baby is in their arms, the magic begins. Bonding is heightened with breastfeeding.

As girls grow up, mom may be their best friend or a role model. However, beyond the “terrible twos” are the torrential teens. Extra rounds of japa or pranayama may be needed. It’s natural for growing girls to try to pull away and exert their independence. Closed doors. Endless chatting or texting with friends.

They no longer sit on your lap or engage in conversations. Professionals warn parents that when kids mature, they need the wings clipped a bit.

Finding a way to hover next to them, without cramping them, is key. Following are suggestions from some strong mom/daughter teams. 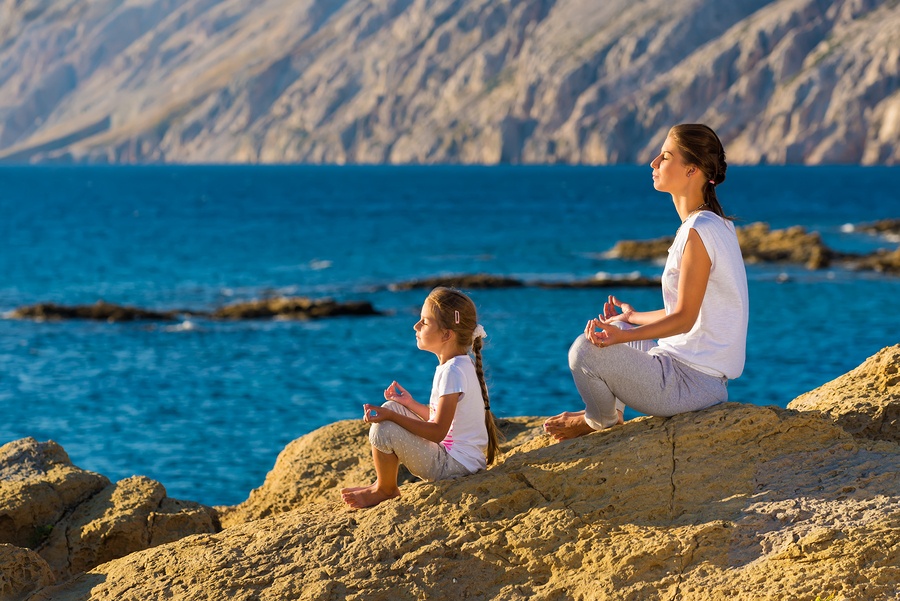 Nancy, a mother of two from Evanston, Illinois, has an annual tea time tradition with her daughter, Jess. Starting when Jess was five years old, the outing began with a visit to a bookstore, followed by high tea.

Mom and daughter would read together, sip tea, and discuss their book. The tradition continues 24 years later and has included high tea in Vermont, as well as on an Alaskan cruise. The two frequently share titles by their favorite author, Barbara Kingsolver.

At age 41, unable to conceive, Maria prayed for a child at the Basilica. She felt physically, mentally and cognitively that something had happened right then and there. Three weeks later, she confirmed she was pregnant. Hence, church life is important to this mother/daughter duo. Maria lectors, and her daughter became an altar server while in second grade.

Now a freshman in college, the miracle child lectors, ushers, sings in the choir, and “lives our faith which is expressing God’s love and acceptance of others.” An unforgettable trip together was to Paris and mass at Notre Dame when Pope John Paul passed.

Barb was adopted when she was a baby. She and her mother forged very tight bonds. As a child, she and her mom played tea time, and she’d dress up in her mother’s jewelry, dress gloves, and hats.

Mom would take Barb downtown to an elegant room in a major department store for fashion shows. As an adult, with tables turned, Barb would take her mom to lunch, a movie, and grocery shopping every Saturday. Since her mom passed five years ago, Barb has seen few movies.

For the last ten years, during Thanksgiving weekend, Brenda and her mom make a habit of visiting a Peace Market to benefit their local women’s peace and justice center. Brenda’s mom is a youthful 80, and Brenda just treated her to a mother/daughter restorative yoga class.

Although Laura is another fiercely independent feminist, she bonded in the kitchen with her mom in El Paso. “Cooking has always been our way of connecting,” she says. “I learn traditional recipes from her, like tamales and salsas, but she learns healthier or plant-based versions from me.”

Keeping the kitchen connection alive, Laura brings her own two teen girls into the family affair. Laura has a wonderful vegetable garden, and her daughters can make corn or flour tortillas from scratch to scoop up the veggies.

I only have one child, a girl. The love I feel for her is like none other. My daughter has always been very different from me, just as my mother and I were seemingly at opposite ends of the spectrum.

Having completed her 700-hour Yoga Therapy, in accordance with the International Association of Yoga Therapists, Deborah offers signature therapeutic workshops…