Music As Medicine, Pt.1…
Select a topic
Join the Community or Sign in

The Dinacharya:  7 Ayurvedic Steps To Ignite Your Internal Pharmacy

In the days when Apollo reigned, Plato explained that music is a moral law. It gives soul to the universe, wings to the imagination, and charm and gaiety to life and to everything else. The word “heal”, in old English, means “to return to a sound state”. What better way to return to a sound state, physically, mentally and emotionally than with the sound of music! Music has played a significant role on my journey through this life and it continues to show me that without it, we could potentially be missing an essential aspect of our authentic experience as humans walking on planet earth.

Scientists and the medical community have finally caught up to ancient civilizations and indigenous cultures in their use and study and believe of the astonishing power of music & sound for healing. Much like Shamanic traditions stemming from the East, many centuries ago or Icaros, medicine music from Peru or the like, which heals the scars from the soul simply by listening to them, live preferably as I have experienced myself and through the research I read. Initially and how I came upon this topic was purely from a personal experience which exponentially changed into something more magnificent, as I discovered more and more that in fact, this is a huge topic with incessant research to support it.

Music as medicine – or better, from a more holistic approach, music to aid and support healing – has been recognized since time immemorial. So much so that the oldest ancient scriptures known as “the Vedas” contain many references to Mantras (a word/sound which has the capacity to liberate us when repeated in sequence for a specific amount of time) in relation to curing diseases.

From a more modern perspective, “The Mozart effect”, a term coined in 1993 by Alfred A. Tomatis who used Mozart’s music as the listening stimulus in his work attempting to cure a variety of disorders. The approach has been popularized to a large degree by the medical community.  The Mozart Effect, which is based on an experiment published in Nature magazine suggested that listening to Mozart temporarily boosted scores on one portion of the IQ test, making the listener “smarter”.

Hearing is the first organ, besides the heart, which is developed in the embryo and its the last one we lose upon death. The smallest perceptible sound moves our eardrum only 4 atomic diameters. The loudest is a trillion times more powerful. If our eyesight had the same range, on a dark night, we would be able to see a candle flickering 48 trillion kilometers away!! A range of volume of nearly one million to one!! – Campbell River, Hearing Clinic, Canada

It is no wonder that through our magnificent hearing, healing can occur.

Music in My Daily Life 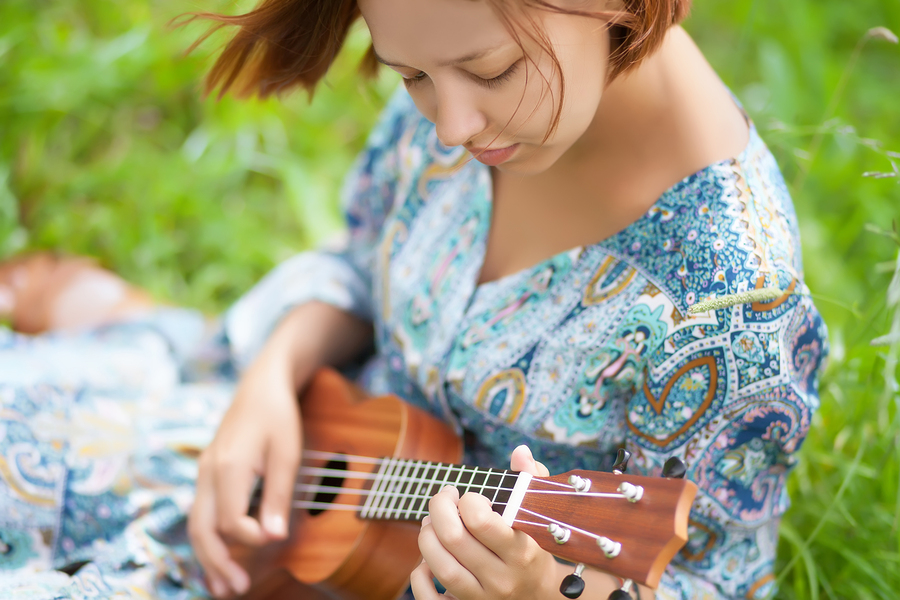 I find myself on the 6th month of pregnancy and my experience with “music as medicine” was more direct during the earlier months of nausea and overall general feelings of discomfort and morning sickness.

In retrospect, was a great exercise of surrender into the present moment, suddenly everyone had advise for me on how to counter it all. Some advice did help, but the biscuits, ginger, and crackers did not. Initially the first weeks, I could do nothing but eat every hour yet sometimes that also did not work, then came the migraines. So, I succumbed to a dark room with a cool-wet cloth across my forehead and eyes, along with deep breathing to help me go to sleep. I could not fathom the idea of playing the guitar, never mind singing, until I became used to the waves or extreme discomfort.

Worth mentioning is that I attend a weekly music circle that was established 15 years ago by my good friend Thomas Keller, (also my guitar teacher). This weekly event surely is the week’s highlight for many of us who attend it and reap the benefits not only mentally, but psychologically, emotionally, and physiologically. Music as our common thread plays a big role in our togetherness that extends well beyond the weekly gatherings.

“The neuroscience of singing shows that when we sing our neurotransmitters connect in new and different ways. It fires up the right temporal lobe of our brain, releasing endorphins that make us smarter, healthier, happier and more creative. When we sing with other people this effect is amplified.” – By Cassandra Sheppard on Sunday December 11th, 2016, excerpt from the article: The Neuroscience of Singing”

Attending the circle during that period, in spite of all my efforts to counter nausea etc, was a challenge. Until one day, I decided to pick up my guitar, re-connect and sing some of my favorite songs. This was late afternoon on a Thursday, the day of our usual circle gathering. I began to play my “tunes”, and the more I played and sang, the better I felt and without thinking, an hour and a half went by and I was still playing with zero signs of sickness. So I got changed and drove to join the others in song. That evening I was able to stay for the entire length of the gathering, which normally lasts anywhere between 4 to 5 hours, singing from the heart, rejoicing with every cell in my body without feeling an ounce of discomfort from what by this point was a regular nuance.

Immediately I thought, there is definitely something to this. And so my research began.

Our connection to music and sound runs deeply within our veins, tissues and entire chemistry make-up. Rhythmic sounds from our mother’s hardworking hearts as the foundation and background mono-tone sound, play on as we gracefully nestled ourselves in her womb. Those were our original lullaby songs, a full-on orchestra of sounds coming from within and outside in soothing unison. I would say therefore our eternal connection to music/sound is much much deeper than we give it credit for.

My stepfather, who has a mild condition in his heart, used his favorite music playlist to help him manage and deal with the high amounts of stress that his divorce was causing him at that time, especially psychologically. He swears by the effects of music as medicine. Now when he plays that particular playlist and sings along out loud, he has nothing but the most pleasant memories which could otherwise have caused him a heart attack.