Everything You Need To Know About Saraswati

The number three in Numerology is usually considered a complete number. A common principle (for lack of a better word) across a number of religions. Probably the most popular one being Christianity where you have the Father, Son and the Holy Spirit. It’s not surprising when people say that there are a number of similarities between the most popular religions of the world.

Hinduism is no different in this respect, because they actually have three distinct Gods and Goddesses that complete the divine trinity. In fact, there are two: the Gods that comprise Brahma, Vishnu, and Shiva and the Goddesses such as Lakshmi, Parvati, and Saraswati.

(If I might add that while the Abrahamic religions emphasize the power of the masculine, this is not so with Greek & Roman as well as Hindu mythology too.)

That said, and as in polytheistic religions, each God or Goddess oversees one aspect of human Life. Saraswat in particular, (who is first mentioned in the oldest Hindu text, the Rig Veda) rules knowledge, wisdom, learning, music and the arts.

SEE ALSO: Guru Purnima: One Of The Most Important Days In Hinduism 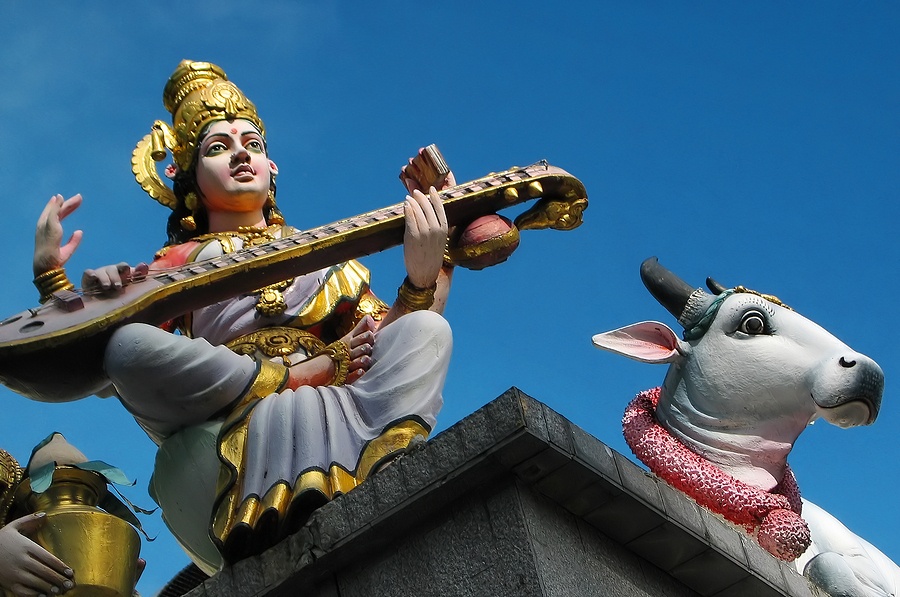 Born of Shiva and Durga, Saraswati is often depicted as a woman dressed in white while also being seated on a (usually) white lotus.

In most cases, she is seen with four hands and with each of them representing four aspect of the human personality: manas (mind), buddhi (intellect and reasoning), citti (imagination and creativity) and ahamkara (ego and self-consciousness). Being the consort of Brahma, her four hands mirror his four heads.

Of course, each hand of hers carries an object- namely a book (known as the Vedas), the instrument ‘veena’, a garland as well as a water pot. Since her role is being the Goddess of learning, students and the educated place great importance in Saraswati as they believe she can help them do well in their studies. Moreover, there is a spiritual reason for this too – since she is the giver of knowledge in the spiritual realm, it is only through her that one can attain moksha or enlightenment.

The pot of water she carries symbolizes the carrying of drink that liberates while also offering knowledge too as well as being able to purify right from wrong. The garland of crystals signifies self-reflection. Apart from this, she also serves as an inspiration to those in the creative arts, traditionally speaking, as she carries a ‘veena’. As expected, almost everything related to art (and the harmony that it creates) is under her care in Hindu mythology.

Another interesting aspect of Saraswati is that she rides a white swan that symbolizes moksha, transcendence, and spiritual perfection. Sometimes she is seen seated next to a peacock too that symbolizes beauty, the celebration of dance while being able to grow plumage despite eating poisonous snakes too. So, given her importance in Hindu mythology, Saraswati Puja (or the worship of Saraswati) is held in a number of Indian states such as West Bengal, Maharashtra, Karnataka and Goa. Vasanth Panchami is held in the month of February – the 5th day of the Hindu calendar month known as Magha.

A popular prayer that is made to Goddess Saraswati is the ‘Saraswati Vandana’ during her birthday, also known as Vasanth Panchami, and translated in English below:

and whose pure white garland is like frosty dew drops;

who is adorned in radiant white attire,

on whose beautiful arm rests the veena,

and whose throne is a white lotus;

who is surrounded and respected by the Gods, protect me.

May you fully remove my lethargy, sluggishness, and ignorance.”

As with most polytheistic religions, there are gods and goddesses who oversee certain aspects of human life – a similarity between a number of Ancient religions (and their mythology) too. While Saraswati is the goddess of learning, knowledge, and wisdom in Hinduism, Athena and Minerva also have similar roles in Greek and Roman mythology. Leaving us to understand that despite the differences in names, languages, locations, and customs, there’s a common thread that binds us together – we’re all human if anything else.