Marissa has based her energy work around what she defines as EcoSpirituality. It is a strong connection to both earth...

What Is Your Style According To Your Chinese Element?

The Benefits Of Amethyst

How To Connect To Your Inner Shiva

Lord Shiva is the Hindu god of destruction. He is responsible for death and the end of things, a necessary part of life’s cycle. It is not only the physical end he brings, but the death of the ego, our imperfections, our fears, our attachments, our desires.

Through these destructions, we achieve further spiritual progression.

We are not held back by these ideas, and can move into a more enlightened future. We cannot have rebirth without death.

Shiva is one of the three Hindu gods that are the governing forces of the universe. There is Brahma, the creator, Vishnu, the sustainer, and Shiva, the destroyer. Shiva is depicted as a man with blue skin. He is often seated in a yogi position, signifying calm reflection and meditation. He has four hands.

In his one hand, he holds a trident, which represents the Hindu trinity of gods, Brahma, Shiva and Vishnu. In another hand, he has a small hourglass drum, a symbol of creation. It is the beat of the universe and assists in Shiva’s dances, as he is also known as the Lord of Dance. Shiva has three eyes, the third eye being his eye of wisdom and knowledge.

His three eyes represent the three aspects of creation. In his hair is a crescent moon, representing the time cycle in which creation evolved. Around his neck is a cobra, symbolizing his power over death.

Connecting to Lord Shiva is a powerful reminder of the necessity of rebirth through destruction. He teaches us to let go of what no longer serves us, so that we may move forward on the pathway to enlightenment.

Here are ways to harness the power of Shiva in our daily practice, so that we too can move along in our spiritual journeys.

The Rudraksha seed is sacred to India.

Legend goes that Shiva meditated for a thousand years on the welfare of mankind. When he finally opened his eyes, he cried tears of compassion.

These tears fell to the earth and from them grew the Rudraksha tree.

The two words, “Rudra” and “Aksha” mean Shiva and Teardrop in Sanskrit.

This stone is found in one of the seven holy sites of India, the Narmada River in Onkar Mandhata.

Its smooth, phallic shape is a symbol of Lord Shiva.

It contains both female and male energy, and represents the cosmic egg from which creation was born.

A depiction of Lord Shiva, either an image or statue, is a way to keep his spirit present.

Having it in a space you constantly visit, such as on your desk, or a place of spirituality, such as a meditation space, are good areas to keep it in.

There are many depictions of Shiva, from Nataraj, the great cosmic dancer, to Dakshinamurti, the youthful figure that sits under a tree in meditation.

Find the Shiva that connects to you and have a statue or image of that Shiva in your space.

Om is the primordial sound. It is the sound that awoke the universe, thus creating it.

Om is broken down into three sounds, “ah”, “oh”, and “mmm”, symbolizing the trinity of Hindu gods, Brahma, Shiva, and Vishnu.

It also symbolizes the three states of consciousness, the waking, the dreaming, and the dreamless states.

By chanting this mantra, we are connecting to the creation of existence and the role Shiva played in it.

Shiva is also known as the patron god of yoga and the arts.

Through practicing yoga, we are engaging in a form of spirituality that cultivates Shiva’s consciousness through the release of self.

We let go of our stress, our worries, and find quiet reflection and contemplation through yoga.

When depicted as a yogi, he sits in Padmasana, or lotus pose in deep meditation.

Check out our beautiful Shiva collection!

We have everything from jewelry to statues to curtains, and all kinds of accessories in between. 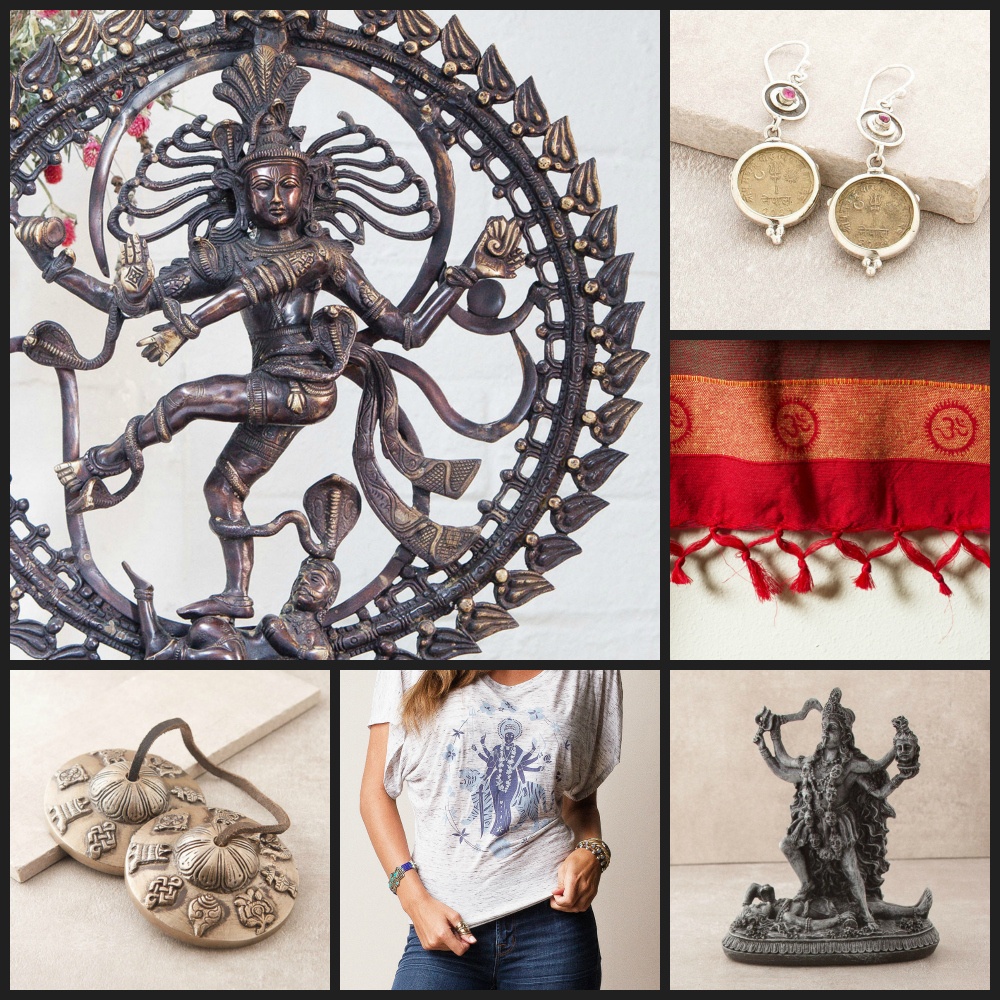 Marissa has based her energy work around what she defines as EcoSpirituality. It is a strong connection to both earth…