The Truth About Vajrayana Buddhism

While many consider Vajrayana Buddhism an entirely separate branch of Buddhism, it is better understood as an evolution of Mahayana Buddhism, which places great emphasis on the use of certain tantras—traditional spiritual techniques—in order to obtain enlightenment as quickly as possible. According to Vajrayana adherents, the ultimate goal of Buddhism can be most effectively realized through these practices.

At the same time, some of these techniques are considered too advanced or even dangerous for the uninitiated. This lends a strong inclination toward secrecy in Vajrayana and makes it even more difficult for non-practitioners to understand. Because of its popularity in Himalayan nations such as Tibet, Nepal, and Mongolia, the Vajrayana school is sometimes referred to as “Tibetan Buddhism.” As with virtually all Eastern faiths, however, there is a wide variety in belief and practice, so such terms are only loosely applied.

Vajrayana is usually translated as “diamond vehicle” or sometimes “thunderbolt vehicle.” The term vajra means “lightning bolt,” which is the primary weapon of the major Hindu god, Indra. This indestructible weapon could penetrate anything; the term vajra was sometimes used for the material from which the thunderbolt is made. Since the word denotes an “unbreakable” substance, it is often translated into English as “diamond.” In the context of Vajrayana beliefs, this suggests the idea of piercing directly and efficiently to the purpose of Buddhism, which is complete enlightenment: Buddha-hood.

As with other schools of Mahayana Buddhism, Vajrayana adheres to the concept of upaya. This, briefly, is the utilitarian philosophy of “whatever works.” According to upaya, anything that brings someone to greater enlightenment is good. Vajrayana, however, is unique for insisting that the most efficient means of obtaining enlightenment are certain spiritual practices known as tantras.

According to Vajrayana Buddhism, these tantras are effective enough that a person can obtain Buddha-hood in a single lifetime rather than through countless reincarnations. The Sanskrit term tantra actually means “weaving” or “loom” and implies an interconnection of wisdom, tradition, teaching, and practice, creating a greater picture of truth. Westerners often associate the term tantric with sexuality, which is not completely unfair. Historically, tantrism has included ritual sex and even the use of bodily fluids for spiritual purposes.

However, most tantras have nothing to do with sexuality, and in practice, the term simply refers to certain spiritual techniques. These can involve chants, the use of symbols, rituals, meditation techniques, or virtually any other form of spiritual action. A major technique associated with Vajrayana Buddhism is the use of prayer and meditation focused on a single, personal deity. This school of Buddhism also places greater emphasis on rituals, formulated behaviors, repetitive speech, and so forth, as compared to other sub-groups of Mahayana. 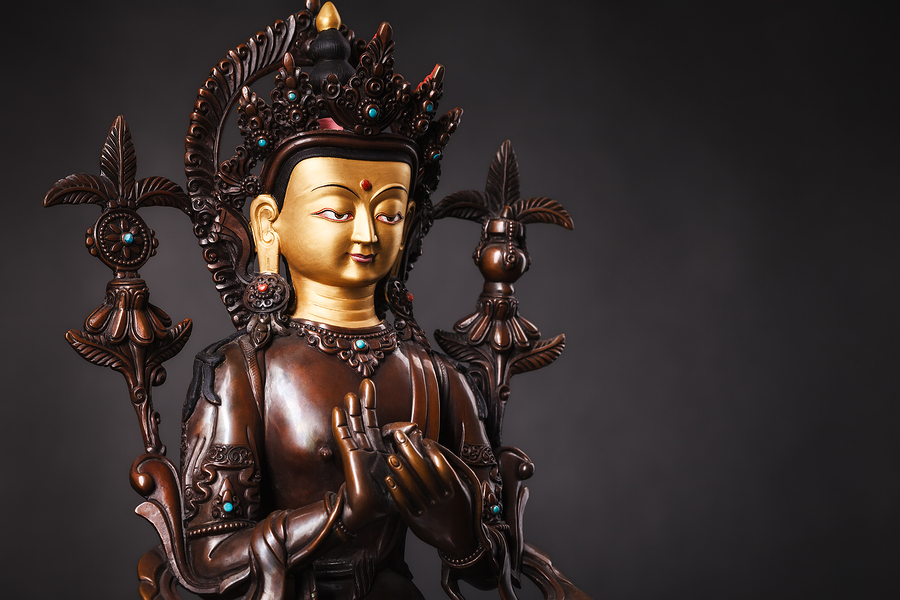 Vajrayana Buddhists claim that their view of Buddhism is identical to that of Gautama Buddha’s, but suggest that Buddha felt mankind was not ready for such knowledge. Some tantric practices are, according to Vajrayana, too dangerous for a layman to learn. They are either prone to abuse, easily misunderstood, or simply dangerous. This, supposedly, is why Gautama Buddha practiced these techniques himself but did not teach them to others.

As a result, Vajrayana functions somewhat like a mystery religion: only those properly initiated and sworn to secrecy can learn the deeper secrets. Needless to say, this lack of openness makes it extremely difficult for non-practitioners to learn about Vajrayana.

Western culture recognizes some aspects of Vajrayana Buddhism in cultural clichés. As part of its belief in guarding spiritual secrets, Vajrayana frequently uses obscured language or symbols. This is somewhat related to the koan concept usually associated with Zen Buddhism. Many of the stereotypical symbols, phrases, and gestures that Westerners associate with New Age or Eastern spirituality originated in Vajrayana Buddhism. While Vajrayana Buddhism shares the majority of Mahayana beliefs and developed from Mahayana schools, some scholars see it as an entirely separate school of Buddhism. Viewed this way, Vajrayana Buddhism would be the smallest of (then) three major schools of Buddhist thought: Mahayana, Theravada, and Vajrayana.