Feb. 15, Nirvana Day: The Day Buddha Died…
Select a topic
Join the Community or Sign in

February 15 is the day millions of Buddhists across the world celebrate the final stage of enlightenment attained by Buddha. Known as Nirvana Day (or Parinirvana Day), it’s one of the most important holidays in the Buddhist religion because it’s the day Buddha died. Interestingly, it’s looked at as a celebration rather than a somber event because he had attained the end of the cycle of death and rebirth, thus breaking the wheel of suffering.

This day is also considered a time to remember friends and family who have died in the previous year.

But just like with Buddha’s passing onto higher realms upon death, Nirvana Day is about accepting the loss as a transition rather than being sad about it.

The Life of Buddha 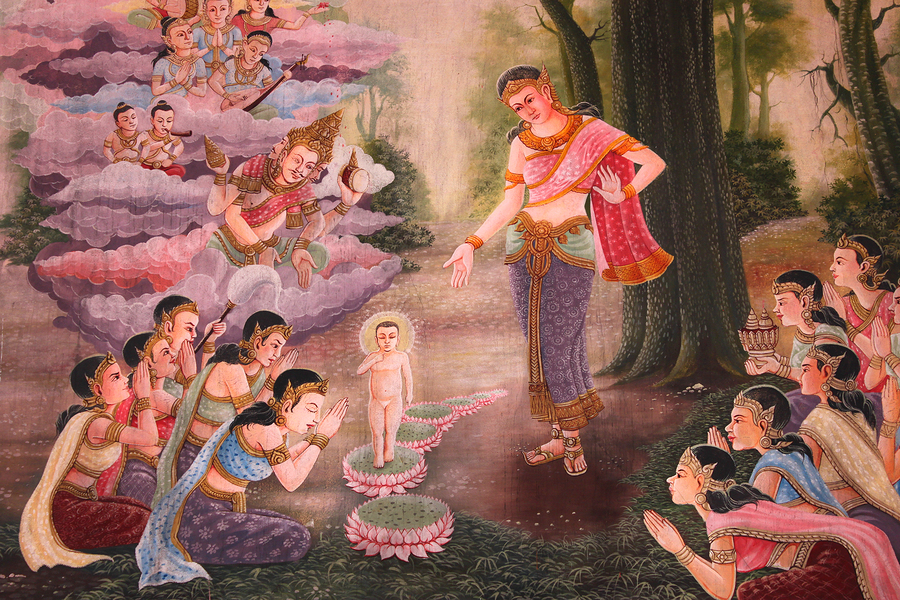 Sometimes, in order to understand the magnitude of something, you need to be able to appreciate its origin.

‘Buddha’ wasn’t always known by this name. In fact, this is a title given to him when he attained Enlightenment underneath a Bodhi tree.

Buddha was actually born as Siddhartha Gautama, a prince in a kingdom of Nepal during the 6th century B.C. Sadly, a week after his birth, his mother died from complications. But Siddhartha’s birth wasn’t quite normal; it was predicted the babe would be a great military leader or a world-changing spiritual teacher. This gave his father great pause, because he greatly desired to have the lineage continue and his kingdom expanded.

So after consulting many holy men and advisors, he decided the only way to assure this destiny was to keep Siddhartha from the true reality of the world. So he had a palace built just for his oldest son, one that was isolated from old age and suffering that plagued the world around them. To say Siddhartha’s upbringing was idyllic is an understatement. He never knew anything but the carefully crafted world his father constructed. It’s even said that his father used makeup to hide his grey hair and wrinkles while around Siddhartha.

At the age of 16, he married and had a child. He lived a happy life…but it was not to last. 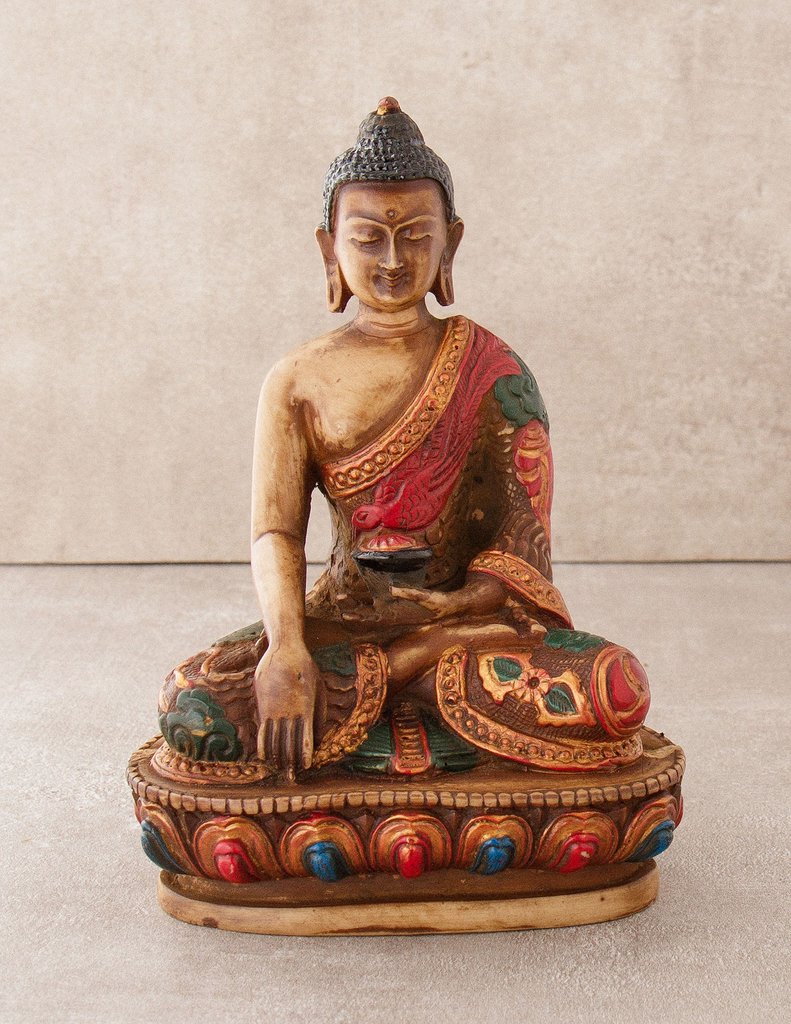 From statues to singing bowls, incense, and even tapestries — our Buddha collection has it all! 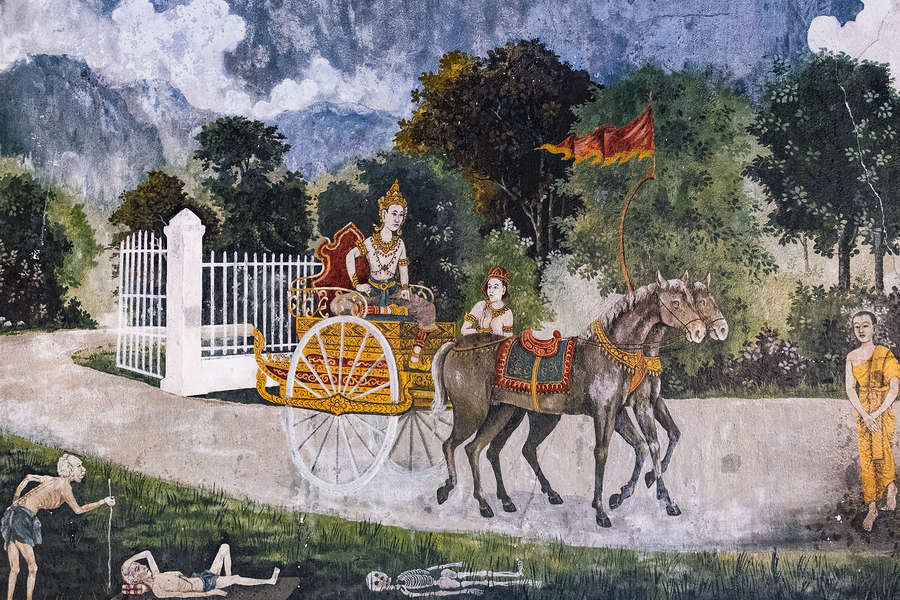 One day, a visitor of the palace told him of the beautiful bloom of spring. Siddhartha became curious at the idea of green grass and blooming flowers. He had never even seen such things before, and he greatly desired to. After learning of his desire, Siddhartha’s father realized there was no stopping him, so he did the only thing he could: he planned the entire excursion.

All the old men, women, and beggars were rounded up and escorted outside of the city, and a procession was organized. Everything was meticulously planned so that the carefully crafted narrative would hold up.

Finally, when the day arrived, Siddhartha strode out to meet his citizens, throwing flowers upon them from atop his golden chariot. But something happened that his father did not plan. As they made their way down the street, he happened to catch a glimpse of an old man down an alley. He was shocked.

He stepped off the procession and ran down the alley to investigate. Frantically, his closest aid followed.

Siddhartha asked his aide: “What is this? Is he human?”

His aide replied: “My lord, this is old age. We are young. Youth will also leave you some day; to you, too, will come troublesome old age. Time saps our strength and steals our beauty.”

Siddhartha was deeply moved. No longer caring for the procession, he continued exploring the city, eventually making his way to the funeral pyres. After seeing the end result of life — death — he no longer believed his idyllic life was alluring.

Thus, weeks later, Siddhartha snuck out of his palace and left to understand the true nature of reality. Forsaking titles, wealth, and power, he wandered into the woods, eventually joining a small band of ascetics.

From statues to singing bowls, incense, and even tapestries — our Buddha collection has it all!

Ascetic Life and the Middle Path 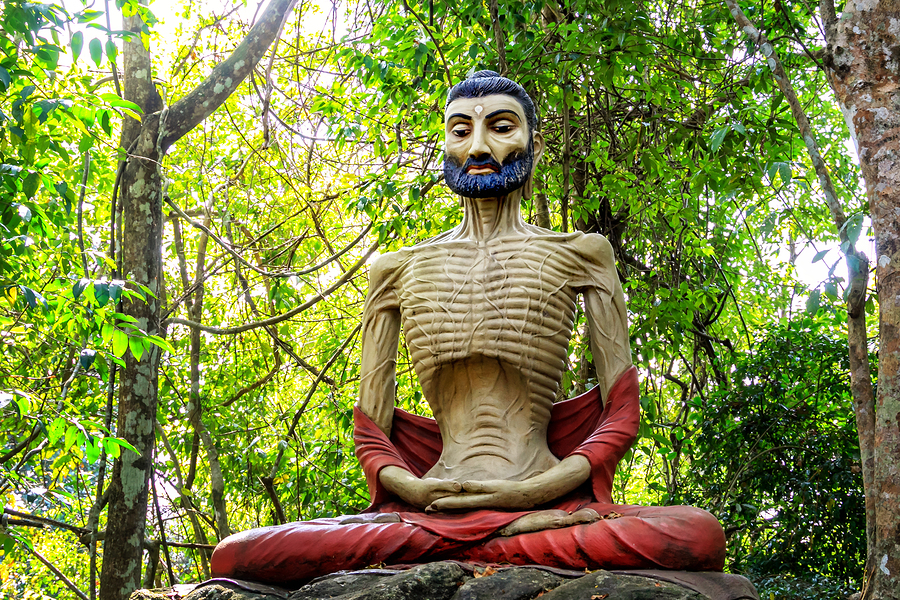 In order to find the supreme truth or reality in the world, Siddhartha and his fellow ascetics felt that extreme measures were necessary. He often starved himself, stood on one leg for days, or physically hurt himself in order to overcome his attachment to the body. But nothing seemed to work, and though he had deep spiritual experiences, he was not enlightened.

Eventually, he ran into a young girl who felt bad for him. She thought he was starving — which, of course, he was. Generously, the girl offered him her bowl of rice. Feeling somewhat defeated, he accepted and ate, breaking his vows as a renunciant of physical pleasures.

It was at this time at the nearby river that he overheard a musician teaching his student: “If you tighten the string too much, it will break. If you don’t tighten it enough, it will be too slack.”

Suddenly, he had a realization. The path of enlightenment wasn’t in the extremes. It was the Middle Path, the path of balance.

Later that night, he sat under a Bodhi tree and meditated until sunrise. Siddhartha would remain there for seven days and seven nights until his mind perfectly cleared. At this point, he saw his entire — and all former lives — unfold before him. Then even Mara, the representation of delusion and suffering, appeared before him, trying to lure him away from Nirvana. But it didn’t work. And when he successfully resisted the temptation, he saw the entire cosmic wheel of life, death, and rebirth displayed before him. This is when he found enlightenment and became the Buddha, or Enlightened One.

Buddha eventually went on to teach the Middle Path across India, attracting a huge following. Even his wife and son, who he left to find Nirvana, became his disciples.

As Buddha came to the end of his life, he had created a huge movement. But having traveled and preached to many areas around India for 50-60 years, he was approaching 80 and losing his health, and quickly. Realizing his end was near, he went and met with all of the heads of the monasteries he founded to give them his blessing.

He and his small band came upon the river Hiranyavati, where he was offered a meal from a blacksmith. Unfortunately, it would be the last meal he ever ate, as he contracted severe food poisoning.

He also told them to keep teaching his methods so that future generations could benefit from his enlightenment. He then died and Parinirvana Day was established to celebrate his enlightenment and honor his death. Buddha laid on his right side, with his hand under his head and the other resting on his body. This is the same as the picture above!

Then, at the age of 80, Buddha uttered his final words:

“Do not say we have no master now. The doctrine I have preached will be your master when I have disappeared. Listen, I beg you: all creations are impermenent; work diligently for your liberation.”

For many Buddhists, Nirvana Day is unique to their own path. Some do intense meditation and read from Buddhist Suttas. Some go on pilgrimages to different shrines, such as the Wat Thai Temple, The Ramabhar Stupa or the Nirvana Stupa. But for all practicing Buddhists, it’s a time to reflect on the impermanence of life and its inevitable end.

As Buddha taught, the only lasting happiness and fulfillment comes from within.