What Is Mahayana Buddhism?…
Select a topic
Join the Community or Sign in

What Is Mahayana Buddhism?

Mahayana is one of the two major schools of Buddhism. The name comes from a Sanskrit term meaning “the Great Vehicle.” This style of Buddhism is most popular in Japan, Korean, China, Indonesia, and Tibet. As with most Eastern religions, the exact boundaries of Mahayana belief are vague. However, there are a few ideas that set it apart from other approaches to Buddhist philosophy.

Among these are an emphasis on the path of the bodhisattva (one who acts in order to bring about enlightenment for all sentient beings), the concept of bodhicitta (a desire to free others from the Buddhist cycle of suffering and rebirth), and upaya (an open-minded acceptance of anything that brings others to spiritual maturity).

SEE ALSO: The Secret Tibetan Rites That Have Given Monks Youth, Rejuvenation, Vigor, And Long Life

Mahayana Buddhism is also more typically “religious” than Buddhism in general; it ascribes worship to specific deities, while classical Buddhism is purely philosophical. Mahayana frequently teaches that there have been many Buddhas—many enlightened ones—who were spiritual projections of an ultimate power, also referred to as “Buddha.”

Following this belief, practitioners of Mahayana simultaneously worship Buddha and maintain a non-theistic worldview. The “deity” of Mahayana Buddhism is not a personal being but an impersonal, all-encompassing force.

The very nature of Eastern religions frequently defies any effort to define orthodox belief or even “typical” doctrines. All the same, global Buddhism can be fairly divided into two major schools. The larger of these is Mahayana, representing approximately three fifths of the world’s Buddhists. Just behind this in terms of raw numbers is Theravada Buddhism, with an assortment of fringe groups making up much smaller numbers worldwide. Mahayana can be further divided into several sub-groups such as Pure Land Buddhism, Zen Buddhism, and Vajrayana Buddhism. 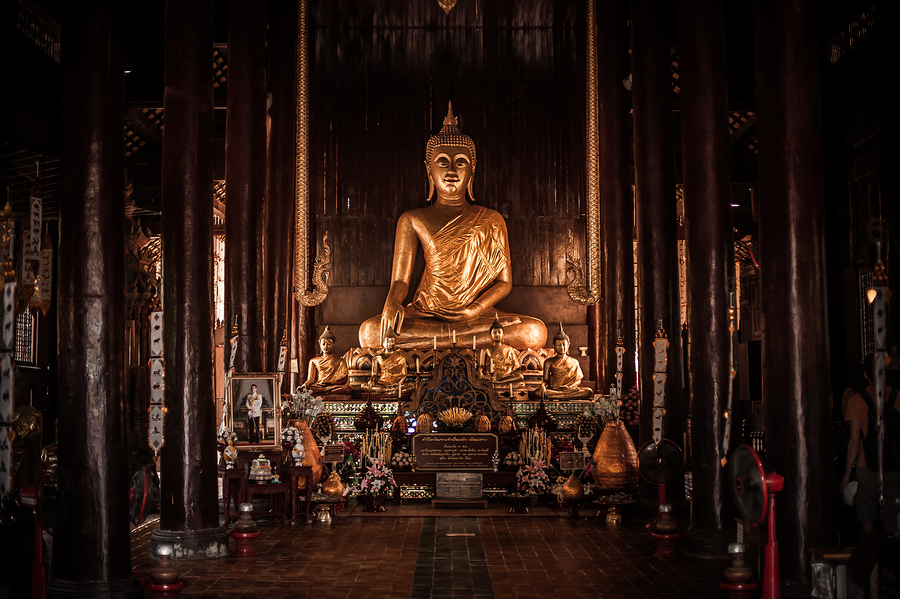 The highest ideal in Mahayana Buddhism is the path of the bodhisattva. Buddhism generally teaches that those who attain true enlightenment cease to reincarnate, thereby breaking the cycle of suffering and reincarnation. The bodhisattva, however, chooses to delay his entry into the state of nirvana so he can lead others to the same understanding. Those who desire to become a bodhisattva and to free others from the cycle of reincarnation are said to have experienced the “awakened mind,” or bodhicitta.

According to Mahayana, each person should aspire to this example of the bodhisattva. This is a major point of difference between the Mahayana and Therevāda schools. Therevāda also upholds the bodhisattva as the greatest possible aspiration, but its pursuit is for a smaller, more elite group. Mahayana holds that all persons should seek to follow the path of the bodhisattva; Therevāda teaches that such efforts are admirable but not obligatory.

In order to pursue the path of the bodhisattva, the Mahayana adherent is expected to practice the “Six Perfections”: giving, self-control, patience, diligence, meditation, and wisdom. At the same time, Mahayana places emphasis on the concept of upaya. In general terms, this upaya can be summarized as “whatever works.” Virtually any practice, belief, or action is allowed, so long as it is not explicitly condemned by Buddhist thinking and so long as it leads to greater spiritual growth.

In practice a Buddhist guru could justify anything—no matter how violent, bizarre, or wanton—as upaya so long as it is meant for someone’s spiritual maturity. This idea is borne out in Buddhist history, which includes countless instances of “crazy wisdom,” where outrageous actions are credited to the master being “beyond” the limited understanding of his students.

Certain sub-schools of Mahayana also teach an interesting concept regarding the “Buddha Nature.” Mahayana’s view of the “Buddha Nature” is that all sentient beings are inherently connected to the Buddha, the ultimate source of everything, but this Buddha Nature is covered by the attachments and sufferings of life, so, in order to be set free, one must “uncover” this hidden inner truth.

Overall, Mahayana Buddhism presents an altruistic interpretation of Buddhism, one very similar to other world religions that focus worship on some deity or deities. Like most Eastern faiths, it is also composed of several widely varied sub-schools. This diversity makes it unwise to assume what any particular Mahayana Buddhist might believe, beyond the fundamentals of Buddhism and the general outlines of the Mahayana school.