5 Things About Lakshmi You Didn’t Know

Lakshmi: The Goddess that Gives Strength to the Gods

And that’s why we decided to make this list! Not only for you guys, but because we were interested too. 🙂

When the gods saw Lakshmi, born from the Milky Ocean, they all instantly fell in love…Shiva even tried to marry her; but he realized he couldn’t because he had already taken the moon.

This turned out to be for the best, because Vishnu asked for her hand, and she had wanted him anyways (score!).

This led to one of most well-known and enduring love stories in Hinduism- because every time Vishnu incarnated, she incarnated with him. Her famous incarnations were Sita (Ram’s wife) and Radha (Krishna’s lover).

Lakshmi at one point left the gods because they had become too arrogant. Their success against the demons had been taken for granted, and had really only come from Lakshmi’s presence and blessings.

It had reached a zenith when Lakshmi saw Indra (the king of the gods) throw sacred flowers on the ground given to him by a sage; after that, Lakshmi went back to the Milky Ocean for 1,000 years.

Having left the gods, their luck began to run out and they soon realized that she had brought all their success. Without fortune, they eventually began to lose their power as darkness crept over the world.

This led to the demons taking control.

Out of desperation, all of the gods began to churn the Milky Ocean to find Lakshmi. Eventually, after 1,000 years, they found her…and never took her for granted again.

The Festival of Lights, also known as Diwali, was created to honor Sita’s return from her rescue by Ram.

Having been abducted by a demon-king Ravana, she spent a long time waiting for her rescue; and after the epic battle and return back to their humble house in the woods, people lit candles to guide their way in the dark.

The usual representation of Lakshmi has many different meanings:

the four arms represent 4 directions in space and symbolize omnipresence; the four hands represent righteousness, genuine desires, wealth, and liberation; and the lotus she stands on represents the material wealth of the world- like the lotus, it grows from water, but it is not wetted by it.

Check out our Lakshmi Flowy Tank! Simple and elegant, it’s sure to turn heads. 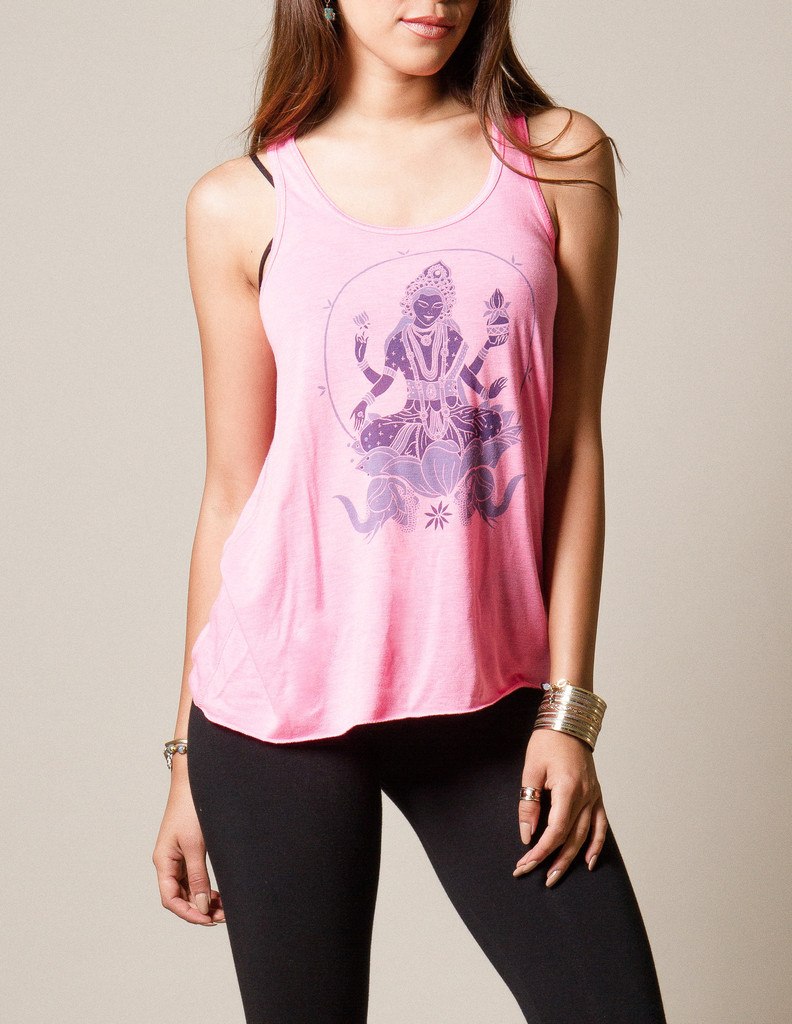