Vishnu is one of the three-headed honchos of Indian mythology. He’s also known as Narayana and Hari along with many other names that you’ve probably heard of while jamming out to Krishna Das on your early morning commute. A little confusing, huh? Don’t worry, we’ll try to explain some of the ins and outs of this incredibly intriguing fellow.

Vishnu is a supreme soul and supreme god in Indian mythology. He is said to be the all-encompassing essence of all life, the controller of the past, present and future, and the one who supports, preserves, sustains and governs all things in creation.

Now, Vishnu isn’t just sitting on a cloud in his heavenly abode; He’s busy making sure all the pins and needles of the universe run seamlessly. In order to do that, sometimes he needs to take a physical form. There are said to be 10 Avatars of Vishnu, meaning 10 different incarnations that he took to intervene on the world’s behalf to make sure the big show would go on. The “dasavatara” (ten avatars) always come to establish dharma or righteousness and fight cruelty and injustice on our pale blue dot. Let’s get this list started. 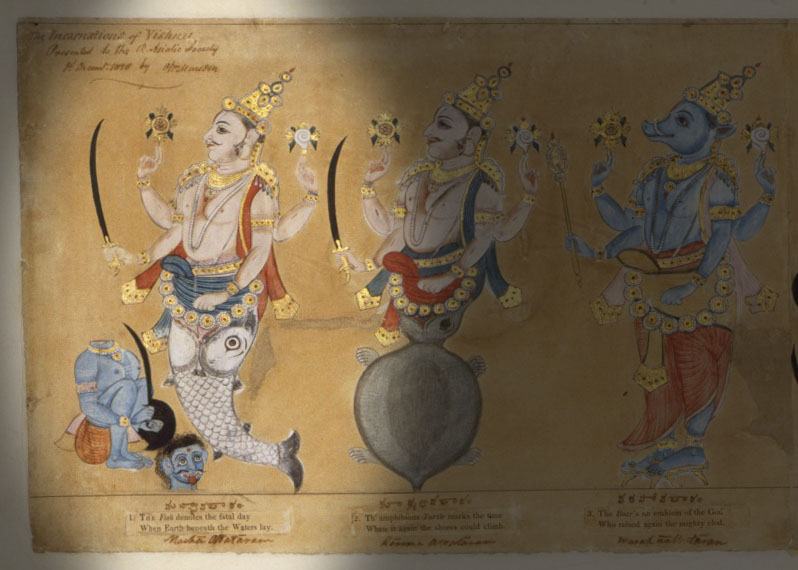 Matsya is the first of Vishnu’s many avatars and was one of the first physical beings of this world. Born as a fish in the Satya Yuga or Golden Age, it’s said that he rescued the first man in creation from a great flood that covered the world. 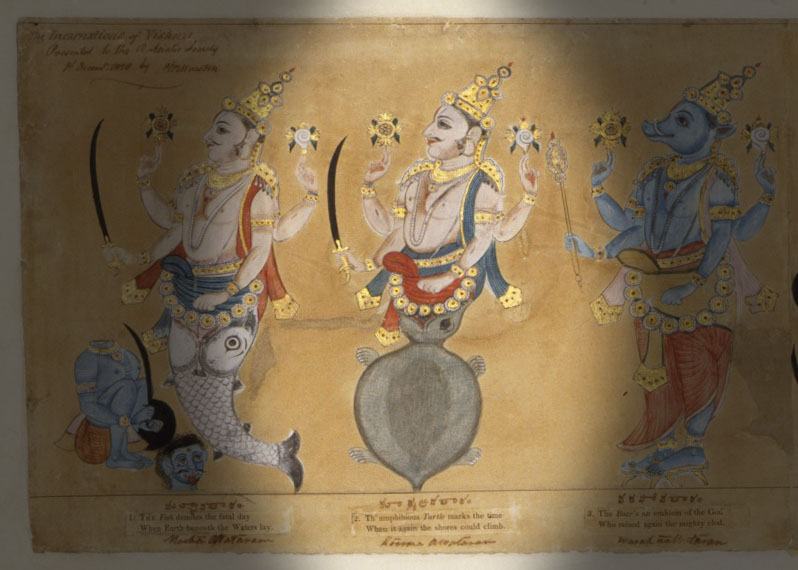 The second incarnation of Vishnu was that of Kurma, the giant tortoise. Also born during the Satya Yuga, he appeared on the scene when the original Angels and Demons were attempting to churn the ocean in order to reach an elixir of immortality hidden away at the bottom. The Angels and Demons were using a mountain as a churning staff, and just as the mountain began to sink into the ocean, Lord Vishnu took the form of a Kurma to carry the weight of the mountain on his back. 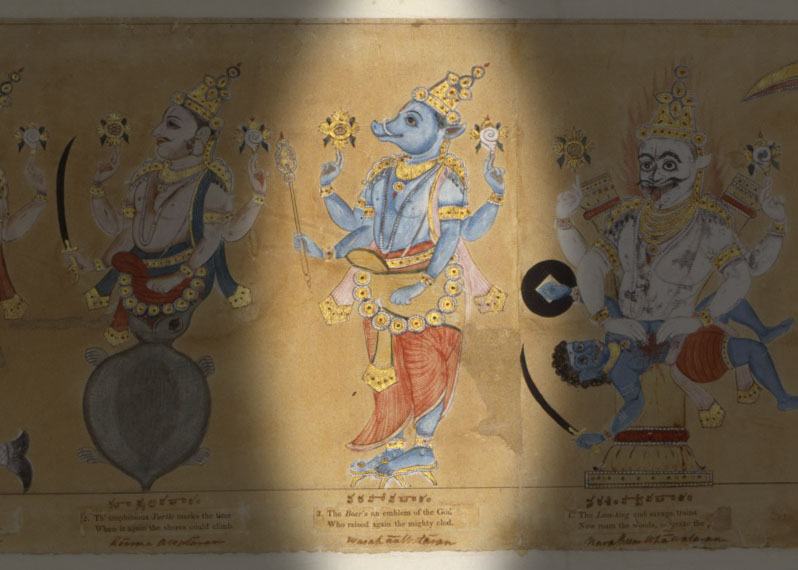 Varaha, the great boar came to Earth’s aid to save it from an incredibly powerful demon. The demon was so powerful that he stole the earth from it’s place in the sky and carried it to the bottom of the cosmic ocean. Vishnu incarnated as Varaha and fought the demon in a battle that lasted a thousand years. Once the enemy was vanquished, Varaha gently rested the earth between his mighty tusks and carried her back to her resting place in the sky once again restoring order and balance. 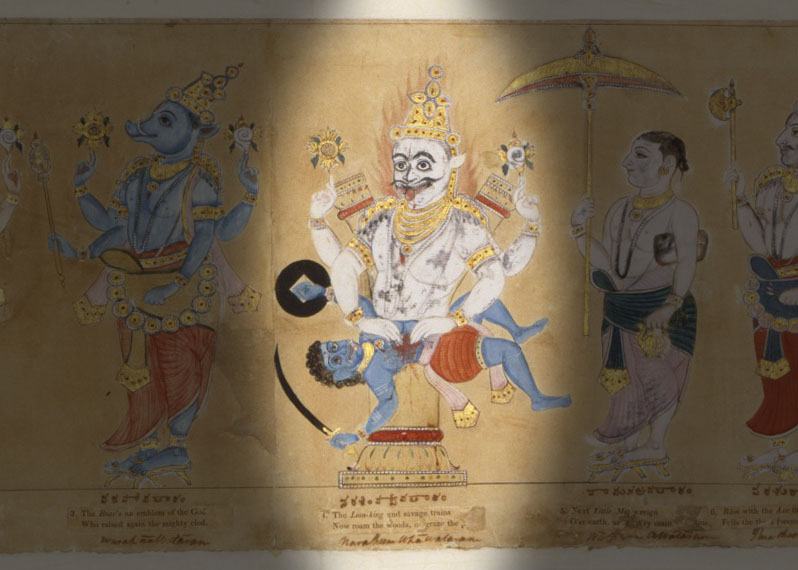 My personal favorite incarnation of Vishnu was born as Narasimha the Man-lion. It’s pretty much exactly what it sounds like, he was born half-man and half-lion at the end of the Satya Yuga. This was the last of Vishnu’s incarnations to be born during this age of man. Narasimha defies the laws of nature and seeks to overpower mortals who attempt to find immortality in unnatural ways.

He specifically came into being when a mighty evil Demon became upset with his son praying to Vishnu and tried to hurt him. The Demon had received a boon (a wish) that he could not be killed by man or animal, inside or out, day or night, on earth or the stars, with a weapon either living or inanimate. So Vishnu manifested as Narasimha. With the body of a man, and the head and claws of a lion, he and killed the deomon using his claws under a courtyard threshold of his home at exactly dusk, while he lays on his lap. Therefore finding a loophole in the boon allowing him to protect the young boy. 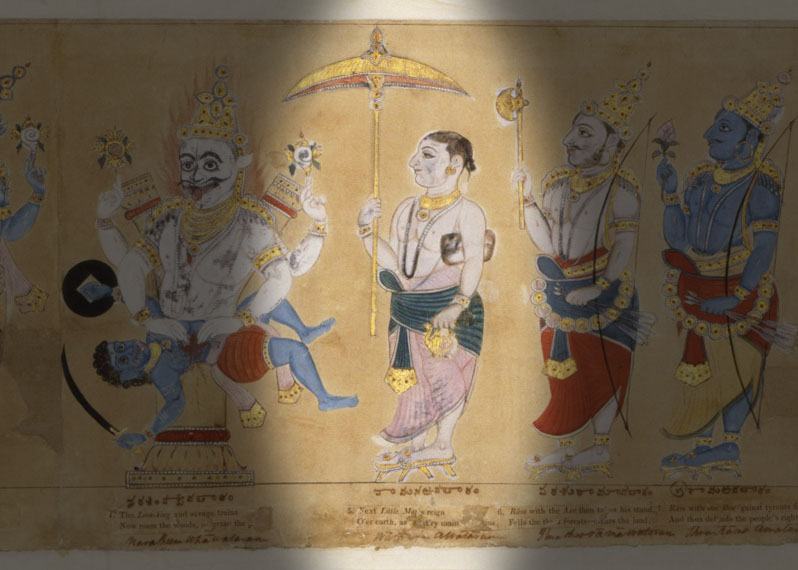 Vamana was the first of Vishnu’s incarnations to be born during the Treta Yuga. He is also the first of Vishnu’s incarnations to be fully human. The story goes that a great king grew in power and extend his kingdom over all the three worlds. To restore order, Vishnu was born as Vamana, a gentle dwarf of incredible intelligence and power. He approached the king during a great festival when he could not refuse a request, and respectfully asked him if he could have three paces of land. The king humored him and granted his request. At that moment, Vamana grew to the size of the world and took three giant steps. He stepped over heaven on his first step, and hell on his second step. The king realized Vamana was Vishnu and out of respect and honor offered his head as the third place for Vamana to place his foot. Vamana did just that and in doing so granted the king immortality. 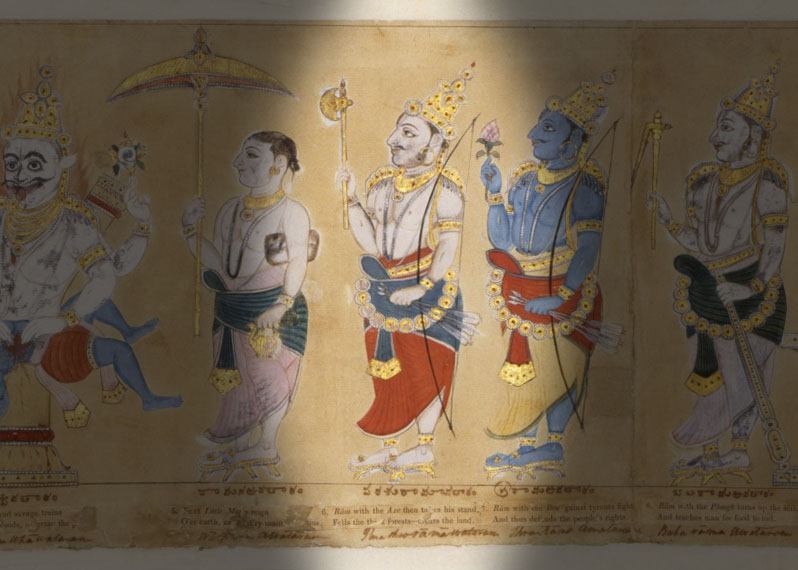 Parashurama is the original lumberjack. He got his famous axe after a penance to Lord Shiva where he also received a boon of immortality. Parashurama is the first warrior-saint with training both in meditation and warfare and is bound by both codes of honor. Once a great king and his army visited Parashurama’s father at his monastery, and his father fed them all with the milk of the divine cow he had in his possession. The greedy king wanted the incredible animal and demanded the cow for himself, his father refused, and the evil king took it by force destroying the ashram and Parashurama’s entire family. In revenge Parashurama destroyed the evil king and his entire family and took a vow to destroy every evil warrior on earth. After 21 generations of destruction, he halted and continued on the rest of his immortality in meditation and prayer. 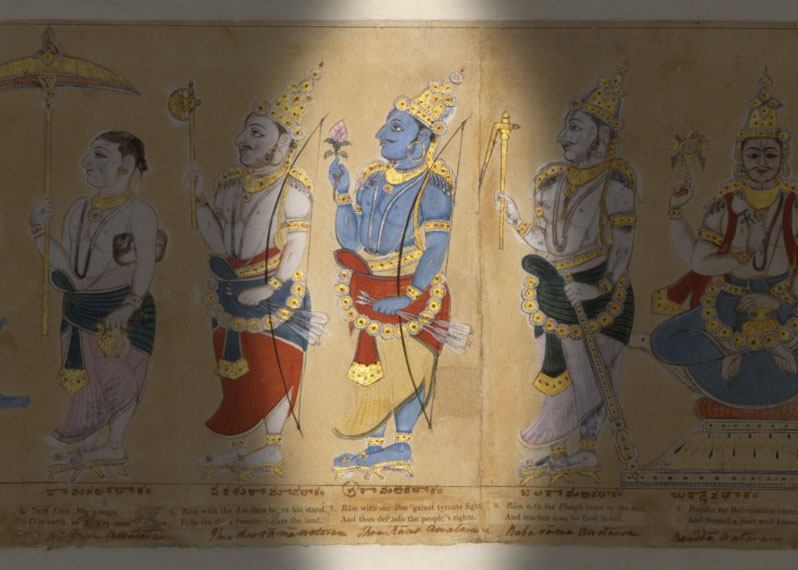 Now we are starting to get closer to the most popular of Vishnu’s avatars. The seventh incarnation of Vishnu was Lord Rama, also considered to be the perfect man. The story and life of Rama is pretty well known with the typical defeat of a demon and an incredible saving of the day. Rama is most famous for being honorable and heroic, even giving up his right to rule his kingdom and going into exile because his father asked it of him. Some other famous characters in Rama’s life are his brother Lakshman, his wife Sita, and his best buddy Hanuman. You have probably heard one of these names in every Krishna Das song ever. 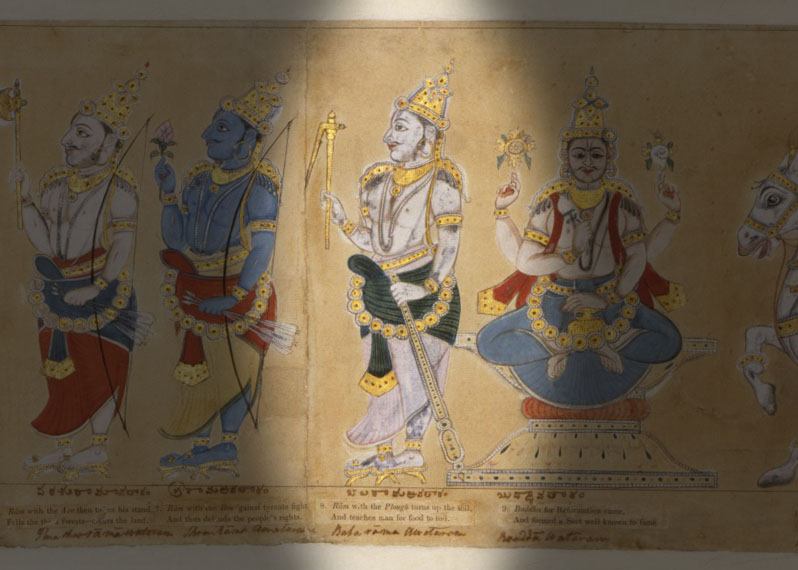 The most famous of all of Vishnu’s incarnations is Lord Krishna. The first of the incarnations to be born in the Dwapara Yuga. He is the origin of the famous Bhagavad Gita and essentially created the foundation of yoga off of which Patajali’s Yoga Sutra’s is based. He is famous for destroying countless evil kings and demons, and being a key figure in the Mahabharata and the Battle of Kurukshetra. The appearance of Krishna was to usher in and lay the foundation of principles in the Gita to help mankind through the Kali Yuga or Stone Age. 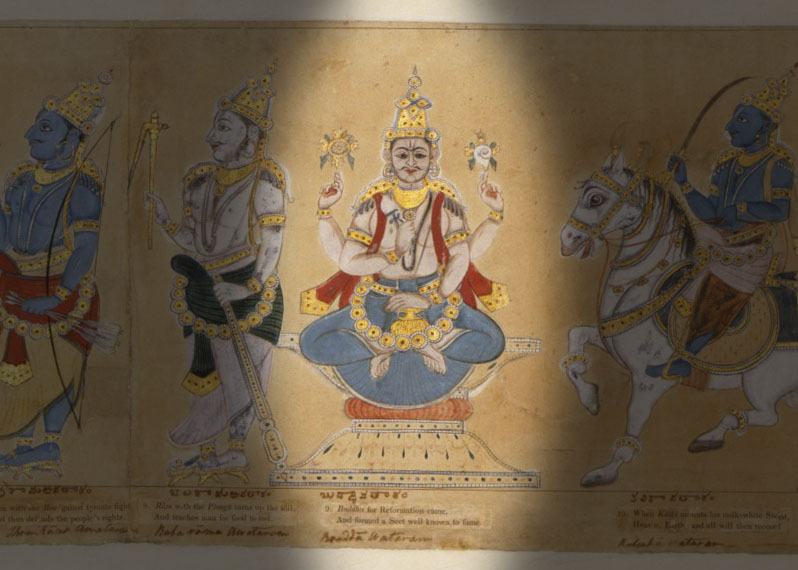 Buddha is typically thought to be the ninth avatar of Vishnu. Originally born an Indian prince with the name Siddhartha, he became world renowned as Gautama Buddha when he became a monk and attained enlightenment. Buddha (literally translating to enlightenment) is said to have incarnated in this form to bring about social change, setting a new standard for the life of a yogi. He is also said to have changed the tradition of animal sacrifice in India and taught new forms of prayer through mindfulness.

And the best is yet to come! 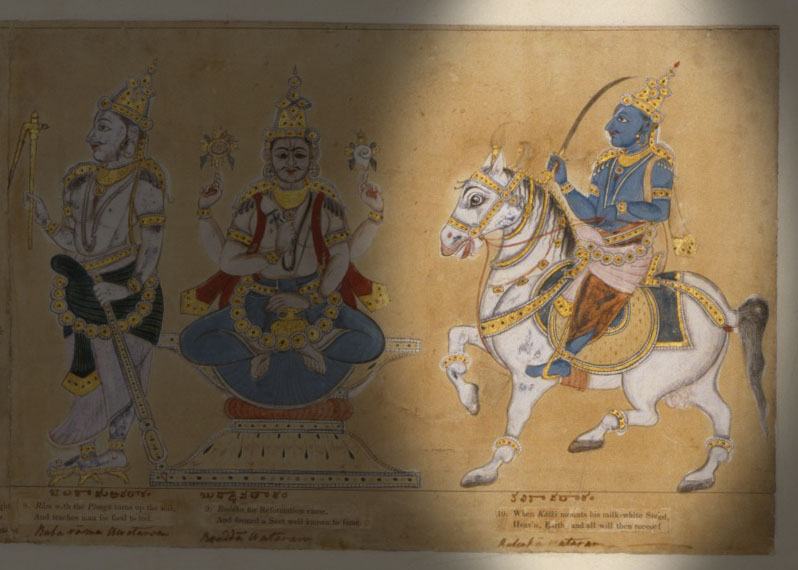 Kalki, the last and final incarnation of Vishnu is still expected to come. He is said to bring harmony to the imbalances of the world and restore order by dethroning the unjust. He will be a horseman, riding on a white horse with a blazing sword to wipe away the darkness of the past. It is said that he will appear on the scene at the end of the Kali Yuga, the age we are currently in.